Death by Powerpoint – Are you guilty? 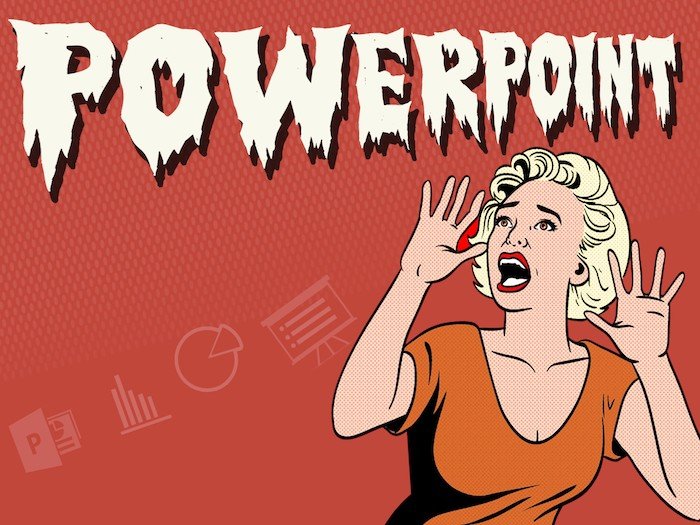 You’ve all heard of the expression, “Death by Powerpoint” – a bit of a hackneyed phrase, but nevertheless true, and death by Powerpoint is always fatal – nobody has been known to survive this terrible weapon.

The truth is that Powerpoint, contrary to popular belief, is Not a presentation – it can be a great tool for a presentation but is so often used as the backbone, heart and lungs of a presentation that lumbers along painfully, before thrashing around at the end (usually at the time during or shortly after the questions) to a quiet but agonising death.

Of course we are also talking about Keynote and any other form of software that can be used to produce slides for presentations – but you get the picture.

Powerpoint is often criticised for not being cognitive, which is not really, in my opinion, a credible criticism for the tool, but more of the users and creators of slides – it’s more what is produced, or who produces them rather than what produces them. Here it’s a more a case of a poor workman blaming their tools than anything else.

If presenters really want to make their slides a pedagogical tool that taps into the cognitive faculties of the brain, then they can – nobody is stopping them and nothing is preventing them for this.

One of the solutions proposed by a notable critic of Powerpoint suggests giving handouts – this, once again, only in my opinion – but you are interested in  my opinion as you are reading this post, is completely wide of the mark.

There are simple things we can do to help our audiences learn more, participate more and get more out of our presentations, here are a few ideas:

1. Don’t come into a room, start your computer and projector, project a slide onto the screen then start by saying “I am going to present / I am here to present ….” this is so glaringly obvious that you do not need to say this, well unless you want to turn the audience right off. As we say, if you want to get the audience’s back up, just tell them things they already know … and they already have a strong inkling of what you are about to do.

2. Create slides that push emotional buttons, are conceptual and get people thinking – use images if they can explain what you need 1,000 words to explain. Instead of talking about the tonnage of beans that Heinz produce every year – take an example that speaks to people; “You know Wembley stadium, don’t you? Well the annual production of Heinz beans would go up to row ‘F’. ” Get people imagining things concretely so they can visualise and understand.

3. Do not project slides that are un-presentable – so often we see people doing presentations that show slides with 20 or 30 lines of tightly-spaced writing, then they promptly turn their back on the audience and read the slide to them. The problem is that the audience has already read the slide before the presenter and have nodded off to sleep – lulled into unconsciousness by the monotonous tone of the presenter.

5. If you really want to feel the sharp hot eyes of the audience boring holes into your back in order to suck your soul out – just get some of those animation things going. You know the ones – words that fly in from the side with a screech of car tyres, words that appear with the sound of a typewriter or a laser beam. If you don’t finally kill-off the audience with this, they will almost certainly kill you off.

6. Waffles are great as a snack or dessert but should not be on the menu during a presentation. Why say in 100 words what can be effectively communicated in ten or even better with an example or image. Here is a clear case of less is more. I was training a group of aerospace engineers when one of them did a presentation that lasted about 120 years (or at least it seemed like it) on a faulty door valve on an airline that could have caused the aircraft to crash – great subject for getting people’s attention but he didn’t seem to want to do that. After the day was over, something clicked with him and he asked to redo the presentation the next day. He used about 4 slides, instead of the original 57! And had an example of the valve, which he passed around and let people see how it jammed.

7. Black out or White out slides when you are asking questions, getting audience participation or answering general questions. You do not need to give a shadow puppet show as you pass in front of the projector beam, blinding yourself in the process. A slide that is not being used, or has been used becomes redundant and sometimes distracting – black it out or white it out and concentrate on what matters.

8. Use a remote control. If you do presentations on a regular basis, get a remote control or a cable-less mouse that can be used as one. There is no point in imitating the little glass bird that dips its beak into a whisky glass as it bobs up and down – much like some presenters do when they change slides from their keyboard.

9. Use MindMaps – if you are comfortable using Mindmaps, they can be anexcellent way to present information in a cognitive-friendly manner – showing things that are brain-friendly. Just because people (nearly) always use bullet points, it doesn’t make them legitimate, effective nor a goo way to get your point [sic] across. Ok, we all have grown accustomed to and almost expect information on slides to be presented in this way – but (as one of my old teachers used to say) we wouldn’t put our heads down the toilet just because other people were doing this, now would we!

10. Don’t show slides that cannot be seen. Hand up those who have projected a complicated tableau of letters and figures that is even difficult to see at a meter away… Yes, I guess there are a lot of us who have done this. If the slide cannot be scanned and understood by ALL of the audience, it has no place on the screen – don’t do this as the only result you will get is that of hypnotising chickens, oh, and infuriating an audience.

A lot of the above is just common sense, but we all know that when we are in a public speaking scenario, common sense heads rapidly out of the window at roughly the same rate as a speeding bullet (no real pun intended here).

If you are guilty of Death by Powerpoint – you will, one day be caught by the lynch-mob lurking in the audience – it is their quest to capture and judge all those that are guilty of this heinous crime.

Go straight now, I beg you – stop annihilating innocent unsuspecting souls with your deadly practices with Powerpoint – get creative, think about the people in front of you, get your message across and make a point – A Power Point!

If you are guilty of these crimes though, This could help you …